During the IAA Mobility 2021, the Hydrogen Center Bavaria (H2.B) will provide information on the topic of “Hydrogen in Mobility” in front of the Bavarian Ministry of Economic Affairs. What role can hydrogen play in the mobility sector? What is the range of hydrogen cars, trucks and buses? What is the difference between electric and hydrogen vehicles? How and where will hydrogen be produced in the future? These and many other questions will be answered by H2.B staff every day between 10 a.m. and 6 p.m. in front of the Bavarian Ministry of Economic Affairs. By means of a digital model of hydrogen value chains, visitors can learn about the various production, transport and utilization options for hydrogen. In addition, a mobile hydrogen filling station will supply vehicles with fuel cell propulsion and visitors can thereby experience live the application of hydrogen technologies. On September 10, 2021, starting at approx. 8:45 p.m., a spectacular 3D video show will bring the building itself to life.

During the week of the trade fair, a mobile hydrogen filling station will supply hydrogen-powered vehicles (cars, buses). The aim is to make the innovative hydrogen technology tangible for companies and people. During the refueling demonstrations which take place several times each day, you will receive general information about hydrogen, H2 in mobility as well as the refueling process. In addition, you will have the opportunity to ride along with a hydrogen-powered vehicle (1 pm Hyundai ELecCity Bus / 11 am and 3 pm Toyota Mirai II).

Information booth of the H2.B

What is the difference between electric and hydrogen vehicles in terms of propulsion technology, range, cost and greenhouse gas emissions? How and where will hydrogen be produced in the future? Where will hydrogen play a role in the future energy system? These and many other questions will be answered by the H2.B staff every day between 10 a.m. and 6 p.m. in front of the Bavarian Ministry of Economic Affairs.

Hydrogen from producer to consumer

Hydrogen will play an important role in a climate-neutral industrial society of the future due to its high energy density, good storage capacity and diverse applications. By means of a digital model of hydrogen value chains, visitors can learn about the different production, transport and utilization options for hydrogen and immerse themselves in the future global hydrogen world.

A preview of the installation can be found here:

2 years of H2.B – 200 partners in the Hydrogen Alliance Bavaria

To consolidate and expand the strong position of Bavarian industry and science in the important future field of hydrogen, the State of Bavaria founded the Hydrogen Center Bavaria (H2.B) in Nuremberg on September 5, 2019. With this, Bavaria is pursuing the goal of bringing hydrogen stakeholders together to strengthening the hydrogen economy and achieve the use of hydrogen in broad practical applications. During the founding event, the first 18 stakeholders from industry, science and politics of a future Bavarian hydrogen economy also signed the declaration of intent for the likewise newly founded Hydrogen Alliance Bavaria.

The Hydrogen Center Bavaria (H2.B) and the Bavarian State Ministry of Economic Affairs, Regional Development and Energy invite you to a press conference on September 8, 2021 at 10:30 a.m. to celebrate the 2-year anniversary of the H2.B and to honor the 200th Alliance partner – Wacker Chemie AG.

The live stream of the press conference will be available on this site on September 8, starting at approx. 9:30 am. 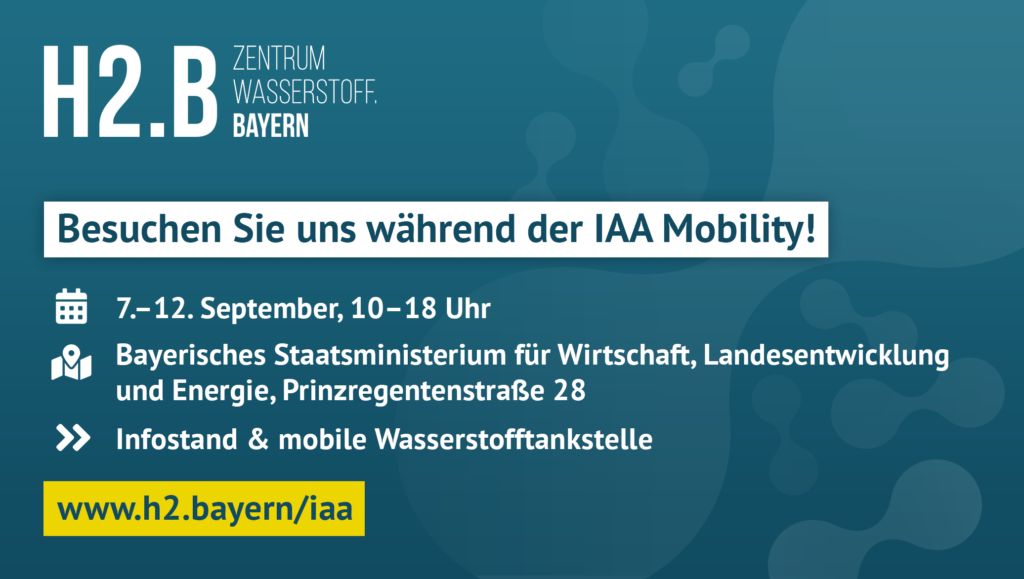 For privacy reasons Google Maps needs your permission to be loaded. For more details, please see our Privacy.
I Accept
Page load link