GLASGOW / OSLO – In the course of a delegation trip led by Bavarian Minister of Economic Affairs Hubert Aiwanger to Scotland and Norway, the Center Hydrogen.Bavaria (H2.B) has agreed on closer international cooperation with important hydrogen clusters in Scotland and Norway.

In Glasgow, H2.B co-chair Prof. Veronika Grimm signed a Joint Declaration of Intent on strategic cooperation in the field of hydrogen with the Scottish Hydrogen and Fuel Cell Association (SHFCA), represented by CEO Nigel Holmes.

Prof. Grimm on the Joint Declaration on Strategic Cooperation: “The Declaration of Cooperation between the Center Hydrogen.Bavaria (H2.B) and the Scottish Hydrogen and Fuel Cell Association (SHFCA) reaffirms the already existing good bilateral cooperation and sets a visible sign of the mutual will for an even closer strategic cooperation in the field of hydrogen. With this declaration of cooperation, we want to make the collaboration between the partners of the two hydrogen platforms from industry and research & development even closer. We also want to further deepen the bilateral exchange of information and experience regarding the acceleration of the ramp-up of the hydrogen economy. I sincerely thank Nigels Holmes from SFHC for the already existing and lived good bilateral cooperation!”

In Oslo, Prof. Grimm signed a Joint Declaration on Strategic Cooperation with the Norway Hydrogen Forum (NHF), represented by Secretary General Ingebørg Telnes Wilhelmsen. The declaration agrees on a deepened partnership between the two sides in the ramp-up of the hydrogen economy.

Prof. Grimm: “We will use our potentials, bring together our expertise and combine the strengths of Bavaria and Norway for the energy transition towards decarbonization. Norway and Bavaria both have internationally leading technology providers and renowned research institutions in the field of renewable energies. The declaration of cooperation is intended to lay a foundation for further international cooperation and networking in hydrogen. We look forward to a fruitful collaboration with the NHF.”

Wilhelmsen: “Norwegian Hydrogen Forum is honored and pleased to have signed a Joint Declaration on Strategic Cooperation with H2.B. We are now facing the most important and difficult industrial challenge, to convert the well-incorporated use of fossil energy into renewable. H2.B represents key players within the hydrogen industry, and with H2.B, we see a state that is truly committed to take the necessary steps to meet the climate challenge. NHF looks forward to a fruitful cooperation with H2.B. We hope to learn a lot, to share experiences and to take concrete action to stimulate and strengthen the cooperation between German and Norwegian companies and institutes.”

On a political level, the Free State of Bavaria and Scotland signed a Letter of Intent to expand Bavarian-Scottish business and scientific cooperation with a focus on green hydrogen. In the Letter of Intent, the green hydrogen trade is agreed with Scotland as an exporting country of green energy and Bavaria as an importing country. Suitable hydrogen logistics routes including the corresponding infrastructure, certification, identification and support of joint demonstration projects are to be planned jointly.

Aiwanger: “Within Europe, we count on reliable transport routes such as hydrogen pipelines and ship transports. Scotland is a politically stable European partner with a potential of 25 percent of European offshore wind power generation. This means that large quantities of hydrogen can be produced. Scotland intends to build a North Sea pipeline that will dock in Lower Saxony. This makes it all the more important to quickly connect Bavaria to the German pipeline network, which will be converted from natural gas to hydrogen as part of the transformation. Bavaria will also intensify the production of its own renewable energies. But that will not cover our needs. We are an attractive partner for Scotland with our Center Hydrogen.Bavaria (H2.B) , our hydrogen strategy focused on technology development and the many innovative high-tech companies in the hydrogen sector. Bavaria delivers high-tech, Scotland green energy.”

To intensify the cooperation, the Bavarian Minister of Economic Affairs appointed David Scrimgeour, a Scotsman living in Munich, as contact person in the field of hydrogen for Bavarian companies wishing to become active in Scotland. Scrimgeour has a good network in Bavaria and Scotland.

In Oslo, Minister of State Aiwanger agreed with the Norwegian Minister for Petroleum and Energy, Terja Aasland, to expand the good cooperation in the field of energy supply. Aiwanger: “Norway is on the way to replacing Russia as our largest energy supplier. Given the enormous offshore wind power potential, Norway will also become a very important supplier of green hydrogen alongside Scotland. For the transition, we are counting on Norway as a reliable exporter of natural gas.”

Economics Minister Aiwanger was accompanied on the delegation trip by a number of representatives of well-known Bavarian companies and scientists from the Hydrogen Alliance Bavaria, as well as state parliament members Alexander König and Benjamin Adjei. 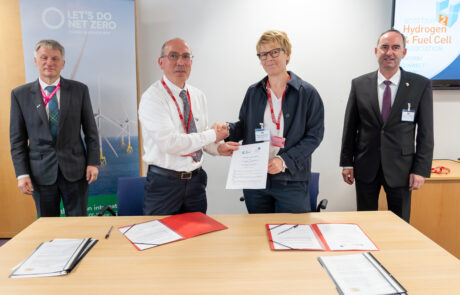